ON YOUR MARKS, GET SET…NEW BUSINESSES ARE OFF TO A FLYING START 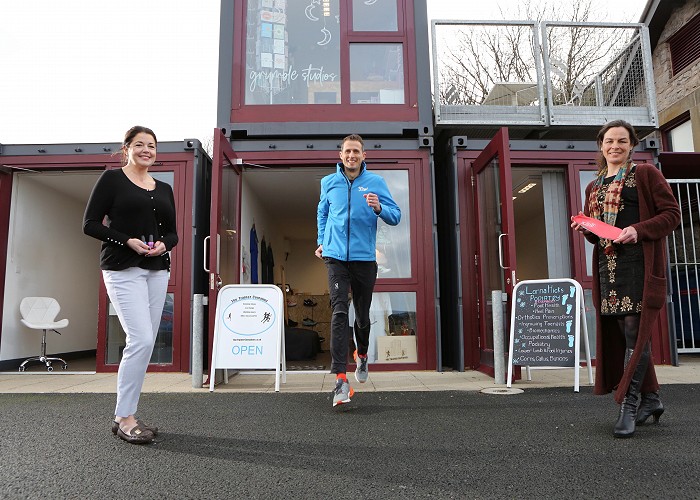 AN ELITE athlete who claimed the scalp of Olympic legend Sir Mo Farah is setting a different pace by launching a new business.

Abergele’s Tom Carter, a former Great Britain mid-distance runner, has opened up the Trainer Container selling On, a new up-and-coming brand of Swiss trainers, alongside a range of sustainable sportswear from Wrexham’s Vinyl Bear.

Based at Y Shed, Meliden, the Trainer Container is one of three new businesses to set up there in the last few weeks. Joining Tom in the converted shipping containers-turned business spaces are beautician Johannah Hughes and podiatrist Lorna Hicks.

Tom, who beat fan’s favourite Sir Mo in a Grand Prix race, gave up running after achieving his aim of completing a mile in under four minutes. A qualified sports teacher and son of Olympic runner and 800m champion Andy Carter, Tom is looking to pass on his knowledge to other racers. Not only will he be introducing ‘try-before-you-buy trainers’ enabling customers to have a run out in the footwear, but he will be hosting a Y Shed question and answer evening for runners of all abilities as well as hosting a race at Marsh Tracks, Rhyl.

“Y Shed has given me a great springboard to start my new business,” said Tom, who narrowly missed out on a place in the 2012 London Olympics.

“On is an up-and-coming brand and I really like their ethos. I am looking to build a running community here, one that supports and helps each other. I’ve not longed moved to Y Shed but business is heading the right way already and runners and runners’ clubs have given me a warm welcome.”

A project championed by charitable housing association Grŵp Cynefin and Meliden Residents Action group, Y Shed opened its doors in 2019 and, despite pandemic lockdowns, has still managed to attract around 40,000 visitors a year.

For Tom, Johannah, and Lorna, Y Shed’s sense of community was a big draw. Aimed at start-up or growing businesses and based on the Prestatyn to Dyserth railway, Y Shed gives traders help to get their feet off the ground with affordable rents, free wraparound support including marketing, and a start-up grant to spend on their business.

Beautician Johannah, from Rhuddlan, has been sharing space with her hairdresser daughter in Prestatyn but, after 20 years in the business and with a growing clientele, decided to branch out to a place of her own. Podiatrist, Lorna, from Dyserth, had also been sharing space but wanted to develop a clinic that would allow her to use her full range of skills and new therapies. Both bring a solid client base with them who, in turn, are also making the most of Y Shed’s other offers, including a café and gift shops.

Delighted Johannah said: “Every day, I have to pinch myself. Y Shed is not just in the most extraordinary location with beautiful views, but the support on offer is great. These units are ideal for small businesses. I love to make people feel their best, and now I can do that in a place that’s just wonderful.”

Lorna, with over 30 years’ experience in diagnosing and managing foot and lower limb problems, said there was a nice synergy between the three start-ups. Being based next door to Tom, Lorna said: “There is an overlap between my knowledge of foot mechanics and human movement which links nicely with Tom’s new On trainer range while some patients of mine may like to spoil themselves with the exclusive beauty care from Johannah. From the outset, we all wanted to help each other as there is some natural correlation between our respective businesses. I’m excited to be working alongside them.”

The aim of Y Shed has always been to bolster new businesses, enabling them to expand and move on. Dog groomers Bow Wow’s was a prime example, having developed its client base so much it has now moved down the track to larger premises in Dyserth where they now also offer dog day care.

“Y Shed is on the Prestatyn-Dyserth walkway which attracts tens of thousands of walkers, runners and cyclists every year. So, to have three complementary businesses on site that can support those activities is great. The intention has always been to help businesses and sole traders in the hope they achieve or grow a solid customer base. It says a lot about Y Shed and its reputation that the three units were snapped up in next to no time. Despite everything and periods of closure, Y Shed still welcomed more than 40,000 people through its doors – Y Shed is a thriving venue."

Tom, Lorna, and Johannah will be hosting a ‘meet the businesses’ week in March with a range of activities planned. The event will run from March 17-20 and will feature all Y Shed businesses, including the Grumble Studios gift shop.

Prestatyn to Dyserth Way
The Prestatyn to Dyserth Way opened as a three-mile railway from the Chester and Holyhead railway in 1869 and served the mineral trade largely transporting lead and limestone. A passenger service began in 1905 between Dyserth and Prestatyn with 30,000 people using it each year. The shed closed in 1957 and reopened briefly as a business premises before closing again. The railway itself ran until 1972. Funding for Y Shed was secured from the Big Lottery Fund Wales, Denbighshire County Council, Gwynt y Mor, and trust funds.

Back to Y Shed Stories.